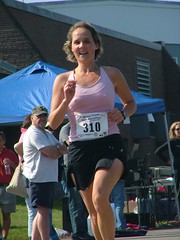 Training for the Auckland half marathon last month, yes not much fun at the best of times, was highened by developing a tight lower back.  Thinking it could be old age, OK you are only as old as you feel which is now 21 again, or maybe general lack of serious training was at fault, I got a nice supprise.

In walks Ian McKellar from Massage Bodywork.  He works with a number of the worlds top Iron Men.  He suggested that before he would provide a massage he required proper hydration. Otherwise the toxins in the muscles would not be released.

By the time I arrived for my massage 4 days later, my lower back tightness had gone.  It was good hydration that made a world of difference.  I was drinking heaps of water but maybe not getting enough electrolytes. I now use what is called ‘elete electrolyte’ liquid from www.biotrace.co.nz and Electrolyte Stamina Tablets from www.mineralresourcesint.com.  Both do a similar thing taken in differnt form.

p.s. What can you do differently today?  If you do the same as you have always done, you will get the same as you always got, and go backwards.  Everything in the world is changing fast, especially the information overload, hence we all need to change so we do not stagnate.